My good friend of more than 40 years, Brian, sent me this link about Star Trek. It’s by the BBC, and an excellent journey back through that show, and its impact. Whatever happened to shows with critically cogent commentary on current cultural conundrums?

Along with Star Trek, I remember Sunday evenings, when we all settled down to Lassie and then an hour of The Wonderful World of Disney. Mostly heartwarming, occasionally dramatic, that television watching opened up the week for us. Supposedly we had each finished our chores and our schoolwork before 7:00pm., and even Mom and Dad joined in the watching. It really was a family time.

How about the movie 2001 a Space Odyssey? (There’s a word no one can remember how to spell!) I took my girl friend at that time to see it in the theater. She was bored. I was spellbound. And it was all so ‘deep’ with meaning.

Beginning in 1963, we didn’t miss a single launch from Cape Canaveral. The whole family sat around the television, dinners on TV trays, breathlessly listening to the countdowns. My dad took time off at lunch from the office, walked a few blocks down the street, and watched NASA broadcasts through the window at Sears. The race to the Moon was real life drama.

In November 1963, I remember being sent home early from school when the news arrived over the radio that President Kennedy had been assassinated.

In July 1964, I remember the race riot in Rochester. It made me think, “What the heck is going on?” Later, I went to Manhattan with my brother and dad, to pick up my grandmother from the transatlantic voyage she’d made. We stayed at the YMCA, with the bathroom down the hall, and visited the top of the Empire State Building, where I threw up from acrophobia. And we visited the Natural History Museum, with its elephants, blue whale, and lots of dinosaur skelet

In July 1965, I went away to Boy Scout summer camp for the first time — two weeks living in a tent more than 5 hours from home, eating in a dining hall, using a latrine. I was too busy having fun to be homesick.

In July 1966, besides running my paper route, I went with my troop to inaugurate the huge new Boy Scout camp an hour from home. It would be our playground for the next ten years: everything from serious campouts year-round, to shenanigans we wouldn’t admit to for decades! 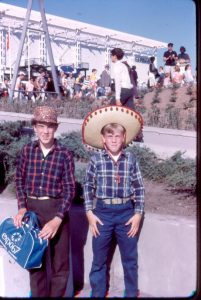 In July 1967, the whole family went to Expo ’67 in Montréal. My brother and I, neither even 13 years old, were turned loose alone for the whole day, each with a sack lunch and a few dollars for souvenirs. There were hundreds of thousands of people there, and he and I had a blast! Here’s a photo of us outside the Soviet Union Pavilion, into which we had entered surreptitiously by the exit door to avoid the long line at the entrance. I stood in awe there, looking at the spacecraft and rockets, and the rows and rows of postage stamps behind glass. 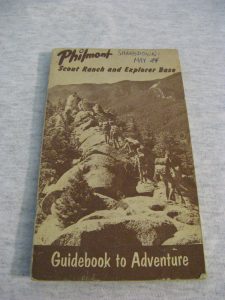 In July 1969, I remember being on a plateau in New Mexico, standing around a campfire with dozens of other boys, looking up at the night sky, and listening to the landing on the Moon over a transistor radio. We craned our necks, and wished we had stronger binoculars. Amazing!

Where were you then?