I was helped by a friendly neighborhood lady, who brought out cool washcloth to soak up the blood, and then a Bandaid or two. I suppose I walked the two blocks home, and surprised my Mom at my injury. But I was probably back on the bike in no time, and I’d learned a lesson: Don’t wear beach flip-flops while riding on loose gravel!

A bicycle took me on my rounds as an afternoon paper boy for several years. It may have been the same bike as I’d crashed. I added wire frame baskets on the back, and carried about 50 papers each day, house to house, throwing most of them up onto the front porches. I rode that bike as late into autumn as possible, until I was forced each year to walk the route in the snow.

College proved to be unsuitable for biking. No place to store it in a dorm room; no place to secure it while in class; and those hills in Ithaca were awful. Looking back I wish I had had a bike: it would have been a great 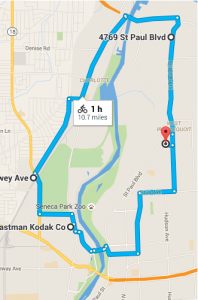 escape vehicle when I was stressed out.

I did have a new bike during those college years: with ten speeds and center-pull brakes, steel frame: probably 40 pounds. During the summers and one autumn when I was working, I rode that every day back and forth to the store or office. Checking on Google Maps, it was a 10 mile round trip each day. Not too tough, except when it rained.

One day I crashed! Pulling up in the left lane, to make a left turn at an intersection, I applied the front and rear brakes. The frame buckled on the front tube, forcing the front wheel into the down tube, which meant — engineering speak here — all the momentum was transferred to the rear of the bike and myself. Over the handlebars, onto my back on the pavement! No damage done, except to my pride. I walked the broken bike off the road and all the way home, since the front wheel wouldn’t roll past the frame. (Joe: you’ve heard this story many times!) 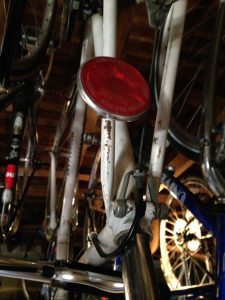 After graduation I bought a new Motobecane Nomade 12 speed: stark white steel frame. Rode it all around Charlottesville, Virginia for 2 years, then brought it to New England, where it ran great in the summer and fall months. I still have it: with the User Manual and the sales receipt. It’s hanging on pegs in the garage, waiting for me to decide to sell it. (You can see that it’s not lonely up there, waiting like a sleeping sloth to be awakened to new adventures.)

In the Nineties I rode a hybrid, chromoly frame, all over the Bay Area. Now it, too, is semi-retired after twenty years, and I ride a carbon frame Trek — again, planning to go all over the area. This and hiking are the best ways I know to relax, get physically tired, and enjoy the countryside.