Soon after the successes in designing subsystems for a new 20MHz tester, while looking around for more ways to contribute to the team, I came into the office on a Monday morning to see a meeting announcement.

“We have all been given a new mission,” proclaimed our manager. In those days, this was not an uncommon occurrence in IBM, yet my co-workers and I had worried looks.

We were assigned to manage a list of development programs within the division, each having to do with “multi-chip modules”. These modules were small packages designed to carry one or more silicon chip, connecting the tiny wiring points on the chips to pins on the package which could then be mounted to a printed circuit board. IBM was at the forefront of new chip packaging technologies, pushing some of their mainframe high-end techniques into their server and mini-computer product lines. Several divisions were involved, and IBM needed a team of Program Managers to get the projects done on time.

This was a far cry from test equipment hardware design, or software programming! That set of tasks had, in the same meeting, been re-assigned to yet another IBM location. They would complete the final touches on the tester we’d been designing, and put it into production. All the guys in the department looked at each other wide-eyed. “Program management?”

The next step was to list the programs. Our manager put a list on the projector. I quickly scanned it, and called out “I’ll take the one supporting IBM Germany!” To my surprise, my manager agreed on the spot.

For the next two years I managed a series of packaging programs, coordinating among IBM Germany, IBM Fishkill, IBM Endicott, IBM Rochester, IBM Burlington, etc. And so began my “traveling days”: almost weekly flights to Hudson Valley. Four months later I flew to Germany for long meetings on technology and programs.

I connected well with the engineers in New York (having grown up in that culture), and in Germany (having that heritage, and speaking enough German to “get into trouble”). I probed them all for details and explanations: long talks and diagrams about packaging design, noise performance, signal analysis, thermal analysis, and so on.

By August I was deep into it. I discovered a course being given at my alma mater, Cornell University, that fall. I presented the possibility of attending to my manager: “It’s about $3000,” I said, and I’d be gone a total of 10 work days. “Seems about right for an in-depth course,” he replied. “Where is it?” Instead of flying to Boston or San Jose for two weeks, I would be flying early morning to Endicott, New York, driving an hour to Ithaca, taking in the class, then coming home in the evening – once a week for 10 weeks. Unconventional? Sure! He approved the plan, for myself and my associate, Bob. 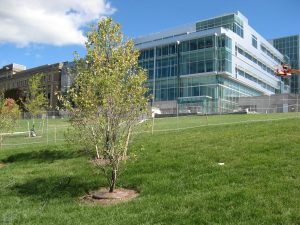 And so, Bob and I went back to school once a week for a semester. We were in class with lots of other career engineers, and some graduate students, learning all the background on high-end packaging. It was exciting! And to be back on campus – wow!

The programs I managed came in on schedule and met their technical performance targets. The systems people were happy. I was happy.

Next: Out into the World.